The concept of sacrifice: the latest thing on the hit list?

First: a disclaimer. I don’t really know very much about the new thinking about “gift” as a central concept in reflecting on what God in Jesus Christ has done for us. I know it’s being offered, but I can’t say that I have read much of the relevant material. It most recently came to my attention via an article in The Living Church about two lectures recently given at the Episcopal Divinity School by Andrew McGowan, the dean of the Berkeley Divinity School. In these lectures, McGowan argues against “sacrificial ideology,” directing us “toward a theology of gift and giving.”

To be sure, the theme of sacrifice has been under attack in the academic world–and consequently in progressive church circles–for quite a while. The  arguments that I’ve heard, for a number of years now, seem to be related to the reluctance in culture and church to focus on anything that might be negative, masochistic, unhealthy, violent, or in any other ways damaging to human self-esteem. More to the point, perhaps, in our present global climate, is the idea that sacrificial language is used by Christians to advocate or justify the use of violence.

McGowan’s approach is interesting (again a disclaimer: I am basing these reflections on the Living Church summary of the lectures by Mark Michael, not the lectures themselves). Like thinkers before him, he puts emphasis on the violence that is presumed to be at the heart of all sacrifice. He puts it this way: “sacrificial ideology” requires “deadly altruism,” and he proposes displacing these notions with a theology of gift and giving, with emphasis on the Eucharistic feast. He refers to a mosaic in the apse in San Vitale in Ravenna, which I have always longed to see. It shows Abel and Melchizedek presenting the gifts at the communion table. He offers this as “an illustration of continuity between Israelite and Christian sacrificial practice.”

(Actually, I think the mosaic at the neighboring church in Ravenna, Sant’ Apollinare in Classe, is more interesting, with Melchizedek presiding and Abel, with his lamb, and Abraham with his son Isaac, as presenters of the gifts.) 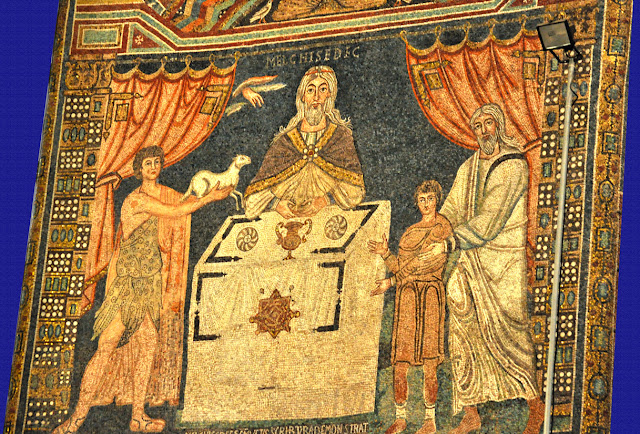 I think we should always be wary of any talk of ideology when speaking of biblical interpretation. I don’t see any ideology in the bible anywhere, not even in Leviticus. If there is an ideology that has grown up around the crucifixion of Christ, then it should be regarded with suspicion. What we see in the appropriation of Old Testament imagery by the New is not ideology, but a series of extraordinarily free, imaginative, fluid, and varying proclamations and expositions by different authors in different early Christian communities as they seek to make sense of Jesus’ violent, degrading death. Bringing in Abel, Melchizedek, and especially Abraham with Isaac as visual images of the many-faceted aspects of Jesus’ sacrificial death are examples of this interpretive freedom continuing into post-biblical times.

I would like to raise three questions and make some points about them. I have discussed these matters at length in my new book The Crucifixion, but this is a bid to put them into an even more recent context.

1) Are acts of sacrifice always to be essentially interpreted in terms of violence?
2) Who is the active agent in sacrificial giving, particularly in the sacrifice of Christ on the cross and, derivatively, in the Lord’s Supper?
3) What’s missing in this interpretation?

First: How is it that sacrificial imagery glorifies violence? I have never understood this argument. I suppose it depends, in part, on how literally one takes the Old Testament pictures of animal sacrifice. If we really are to think, literally, of a large number of animals and birds being slaughtered every single day, with their blood running down in immeasurable quantities, over and over and over, as a visual symbol of the cost of purification from sin, I guess that is an image of “sacred violence,” to be sure (as in Rebecca West’s horrifying account of such sacrifices in Black Lamb and Grey Falcon). But is that the way we are to understand the sacrifice of Jesus Christ?

Who inflicted the violence involved in the scourging, mocking, rigged trial, and crucifixion of the Son of God? Is there any suggestion anywhere in the biblical account or in the tradition that this violence should somehow be transferred and recommended to the members of the Body of Christ? I am entirely baffled by this. Surely we are meant to condemn the violence inflicted upon Jesus, even as we simultaneously confess ourselves guilty of it (“Who was the guilty? who brought this upon thee?… ‘Twas I, Lord Jesus, I it was denied thee, I crucified thee” [from the hymn, “Ah, holy Jesus”].)  When violent passages have been appropriated from Scripture by warriors, they have usually been from the Old Testament (e.g. the young Bible-quoting marksman in Private Ryan) which, it must be said, has been very unfair to the Old Testament, in which the wrath of God is always preceded and followed by his grace and mercy. Giving oneself up to violence inflicted by others, as all non-violent protesters must be prepared to do, is not the same thing–to say the least–as encouraging violence (ask Congressman John Lewis about his beating in Selma).

Second: The acting agent in the sacrificial death of Jesus is the Triune God. We do not see God the Father acting against the Son; the self-giving of the Son is an event in the life of God, not the Father offering up the Son.

But who is the active agent in the Lord’s Supper? The term “Lord’s Supper” was, if I am not mistaken, preferred by Lutherans and some other Protestants because it makes clear that the Lord is the host and we are the grateful recipients. In the Episcopal Church, the term used to be “Holy Communion,” which does not make a statement about agency one way or the other. Shifting the terminology to “Eucharist” (thanksgiving) puts the emphasis on us, the recipients. The procession of the bread and wine toward the altar, presented by church members, was added at this time. I’m not sure this has been a good idea. By the same token, the mosaic in Sant’ Apollinare showing Adam with his lamb, Abraham offering his son Isaac, and Melchizedek presiding, raises a similar question. Whose action is central here? The hand of God is shown off to the side, in the clouds, in a somewhat ambiguous gesture…Is it causing something to happen, or just blessing the action? Surely this is a central question for us. If the Lord’s feast is dependent upon our bringing something to it, then we are thrown back upon our own resources (and I don’t mean bread-baking and wine-making!) If Melchizidek is considered as a type of Christ, however, presiding at the table, then that makes the issue more complicated.

What I’m suggesting here is that it’s very important not to confuse the action of God in the Lord’s Supper/ Eucharist with human action. Human action is “begun, continued, and ended” (Book of Common Prayer) by, in, and through the prevenient (going-before) grace of God. We cannot add anything to the sacrament by giving anything. Everything has already been accomplished for us. Our response is, indeed, thanksgiving (hence eucharist, thanksgiving). But that should not be expanded to include the idea of gift or giving, because we cannot give God anything that he has not already given to us.

Third: What’s missing in the emphasis upon gift, giving, and feasting?

What’s missing is the Cross. If the emphasis is upon “the continuity between Israelite and Christian sacrificial practice,” then there is no room for the utterly new event of the crucifixion of the Son of God. I don’t really understand why there has been, and continues to be, such a studied avoidance of “Jesus Christ and him crucified.” We seem to be turning cartwheels to get away from the clear proclamation of the New Testament that Christ died for our sins, and to conquer Sin (“Oh Christ, thy triumphs now begin/ oe’r captive Death, and conquered Sin”…from the hymn, “Ride on, ride on in majesty”). Where do we find that in this emphasis on gift, giving, and feasting? Somewhere in this picture we need to acknowledge that the Messianic feast (as, for instance, in Isaiah 25:6-9) is an eschatological event guaranteed by the death and resurrection of Christ, not simply carried over seriatim from previous rituals. The Christ-event is the novum (new thing) prophesied by Isaiah, and just as the Servant of Isaiah 53 has always defied interpretation in its original setting, the communion of the Body of Christ with its Head can only be fully understood as the giving of God himself, the Saving Victim, in his uniquely unrepeatable death.

Christ our Passover is sacrificed for us; therefore let us keep the feast! (I Cor. 5:7-8)

These are preliminary reflections upon reading the account of Dean McGowan’s lectures. I’ll probably be adding to them.