An advance copy of a long, detailed, and affirming review of my book The Crucifixion: Understanding the Death of Jesus Christ has just arrived (it will appear in Pro Ecclesia this fall). At the end, the reviewer observes that I do not have much to say about the Resurrection–except to insist (repeatedly) that the crucifixion and the Resurrection are a single, inseparable event–and he hopes that I will write a book about the Resurrection.

I am sorry to disappoint anyone, but there will be no book from me about the Resurrection. I hope that readers will correct me if I am wrong, but I have never read a book about the Resurrection that seemed adequate to me. I think words and comprehension fail us at this point, and only proclamation works: “The Lord has risen, and has appeared to Simon!” “He is going before you into Galilee; there you will see him!” “For now is Christ risen from the dead!” Even my beloved Karl Barth lets me down on this subject, and my almost-favorite commentary on the Fourth Gospel (by Rudolph Bultmann, believe it or not) is hopeless on the Resurrection. My writings about the Resurrection, such as they are, appear in the collection of my sermons called The Undoing of Death. 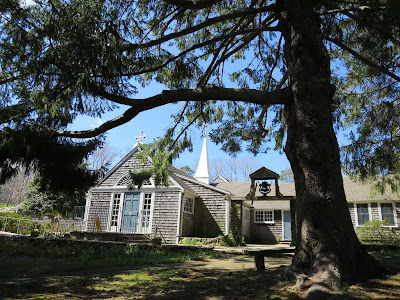 I believe that the Resurrection lives in the worship and the continuing life of the Body of Christ. This morning I attended a service at the Episcopal Church of the Holy Spirit in Orleans on Cape Cod. For me, the service was an embodiment of the Resurrection. This is partly–but not entirely–because the rector, Adam Linton, was a member of the Russian Orthodox Church for twenty years, after graduating from Gordon-Conwell. The Orthodox Church is known for its emphasis on the Resurrection, and Fr. Linton absorbed this well. (He is also, be it noted, an exponent of the theology of the cross, and is thereby an exemplar of the teaching that the cross and Resurrection should be understood as a single, inseparable event.)

The long, somewhat difficult first reading for the day, Acts 11:1-18, was exceptional. The lay reader read slowly, carefully, with understanding and, as Dietrich Bonhoeffer counseled, “with inmost rapport” as if being spoken to directly by the Word of God–not addressing the people herself, but as one being addressed–thereby conveying the awe and wonder of discovery in the final line, “Then to the Gentiles also God has granted repentance unto life!”

The sermon was on John 13:31-35, and specifically the theme of glory (doxa) in John. At the Last Supper, Jesus says, “Now is the Son of man glorified, and in him God is glorified.” This saying occurs immediately after Judas leaves the table “and it was night.” In the Fourth Gospel, Jesus’ “hour of glory” is the hour that he is “lifted up” on the cross. Thus, again, the cross and the power of the Resurrection are linked. In the Eucharist, Paul writes, “we remember the Lord’s death until he comes” (I Corinthians 11:26). In the passage from John, it is clear that the Lord’s Supper is a participation in his glory. 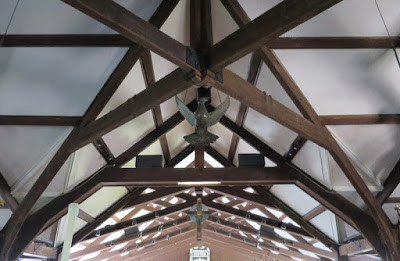 The prayers of the people, very well and audibly read by a layman, were obviously written to address not only the concerns of the community but also the issues of the day, with an eloquent appeal for the healing of our political process. I did not know until the service was over that the prayers of the people at Holy Spirit are written every week by none other than Dilys Smith, widow of Frank Smith who was the beloved organist-choirmaster at Grace Church in New York during most of my 14 years there. Most parishes can find a person who is gifted to write special prayers, and when it is well done it makes an unforgettable impression, week by week. (Not to praise Dilys overmuch, but it was also she who read the lesson from Acts.)

In this case, the petitions this Easter season each concluded with the words, “in the power of the Resurrection, we rejoice, saying…” and the congregation responded each time with “Glory to you, O Lord, glory to you!” By the time of communion, therefore, it was clear to everyone that this was an Easter service, and that the “new commandment” that we should love one another as Jesus has loved us is given to us through the power and the glory of the self-giving of the Lord.

We live in a time when, for most people, Easter is one day and then forgotten. But worship like this is worthy of the Great Fifty Days, and it makes the resurrection alive in our hearts and in our lives.

(And by the way, when I had dinner with the rector and his wife in their home, the meal began with the usual grace and then, unexpectedly, with the raising of wine glasses and “He is risen!” How joyful!)
.