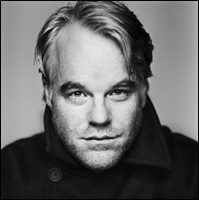 The outpouring of grief all around the country, but especially in the environs of New York City where “Phil” lived and worked, has been extraordinary and has, perhaps, taken some observers by surprise. The acute pain of my own grief has not abated for days; indeed, it has grown. I loved this actor beyond all others. There was a core of sensitivity and empathy at the heart of everything he did, even when playing the most unattractive characters. I was collecting his films, but in a desultory way, assuming that there was no particular urgency. Like many others who knew his work but not his personal story, I had no idea of the struggle he’d had. The idea that there will be no more performances is almost unbearable. He wasn’t just a “character actor,” though he certainly played a lot of characters; he had a range that, the more I think about it, was Shakespearean in its humanity. I can’t even name a favorite performance; it was true of him across the board (or boards). I was looking forward to whatever he did next; now we can only play his old movies and suffer our loss. Now we will never see him play King Lear, a dismal thought that has occurred to several theatre critics who have lamented in print.

James Lipton, dean emeritus of the Actors Studio Drama School at Pace University in New York City, widely known as the creator and host of Inside the Actors Studio on Bravo, was interviewed by CNN (I think it was). I don’t remember ever seeing a scheduled television appearance at the time of a death that was so ferociously in the moment, not studied, not thought out ahead of time, just pure rage and grief. He seemed to be gripping the table (he may not have been, but it seemed that way) as he almost spat out his fury at “god-damned drugs.” He was liberal on most things, he said, but when it came to drugs he felt nothing but implacable opposition and hatred. It was good to hear that. We don’t hear it often enough. I remember when Amy Winehouse died of alcohol poisoning after years of drug abuse. Someone said, “She made bad choices.” As if a person in the throes of  addiction has a choice! This isn’t about choices or “free will.” This is about the bondage of the will by demonic powers.

Heroin, and the drug trade in general, is demonic in every way. I’ve written about this before, in my blog about Helen Mirren who, though she enjoyed cocaine, gave it up because she saw how pernicious the distribution system was. The Soderbergh movie Traffic portrays this well; in fact, if I may be excused for quoting myself, I’d like to repeat what I said in a sermon last summer:

The wrath of God in the Bible isn’t an emotion. It’s God’s implacable, relentless opposition to everything that thwarts his loving and merciful purposes. Let’s try to think of an example. Isn’t the trade in narcotics an unmitigated evil? Don’t you hate it? In Steven Soderbergh’s excellent movie, Traffic, Michael Douglas plays a judge from Ohio who is tapped by the president of the United States to be the head of the national “war on drugs.” Shortly after his appointment, his teenage daughter, an honor student, goes to one of those unsupervised parties where the parents are out of town and the kids take over the house. At this gathering, crack cocaine is passed around. The daughter tries it, likes it, and soon becomes addicted. Her father, seeking his lost sheep, finds her in the company of the worst of the worst, the narcotics underworld…

In Cormac McCarthy’s book No Country for Old Men (the book is a lot better than the movie, even if the movie did win the Oscar), the moral center is with Sheriff Bell, who is valiantly but fruitlessly struggling to contain the drug traffic on the Mexican border. Sheriff Bell is a sort of homespun theologian. He says this:  “I think if you were Satan and you were settin around tryin to think up somethin that would just bring the human race to its knees what you would probably come up with is narcotics.”

Seems to me that this would be a good time for the Church to be more deliberate and more proactive in opposition to this deadly scourge. “Tolerance” of narcotics and the narcotics trade is cooperation with the demonic. Marijuana? I don’t know…but the everyday, casual use of it can’t be good, can it?

A friend and fellow PSH admirer said, “Wouldn’t you think it would be enough to be a person that everybody loved and whose work everybody loved? Yet it wasn’t enough.” It wasn’t enough because he was in the grip of a power that is capable of destroying even the power of love. Or forever trying to. As Sheriff Bell also said, nothing short of the coming of Jesus Christ can stop this train. In the name of the One who has come and the One who will come, the name of the only One whose love lives beyond the power of death and the devil, we owe it to the humanity that PSH enacted so uniquely well to fight against this demon.

Postscript:
My daughter’s health care company (she is CEO) sent out this notice, which I thought was very well expressed. Note how the disorder is personified, like an evil Power (which it is):

“[Hoffman’s] death is a heartbreaking reminder that substance-use issues show no prejudice: a disorder doesn’t care how talented you are, whether you’re a loving parent, or how many people you’ve inspired along the way.”