Emperors and their power 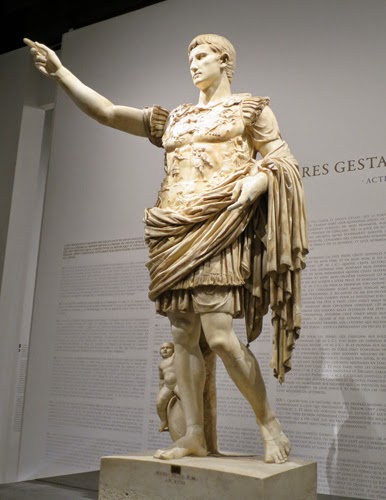 We just spent nine days in Paris, which yielded any number of theological reflections. It was good to see banners on the facades of parish churches proclaiming that “Christ est ressuscité! Alléluia!”

There was a stunning exhibition at the Grand Palais called “Moi, Auguste,” which to an English speaker sounds funny in French (I have never forgotten Clarence Day’s hilarious take on the Bible in French; for that matter, ressuscité doesn’t quite do it for me). However that may be, this announcement is taken from a Latin inscription which begins, “I, Augustus, emperor of Rome…” The theme of this exceptional exhibition was the achievement of Octavian (Augustus Caesar) in stabilizing and unifying the Roman Empire under his “godlike” leadership while making an effort to preserve the values of republican Rome, or to pretend to do so. The artifacts had been collected from all over, especially from Rome, the Louvre, Pompeii, and Naples, but other European locales as well — even Denmark! — and needless to say had never been collected all together in one place before. An extraordinary curatorial success. When in Rome I had of course seen some of the objects, notably the statues of Augustus of the Prima Porta and Augustus in his priestly garb, but the extent of the statuary, coinage, inscriptions, and objets d’art from daily life gathered together was instructive to the highest degree. The way the story was told was as accomplished as I have ever seen in any museum exhibition. I had seen and heard most of it in Rome, certainly, but having it all put together in one place with a single narrative arc, brilliantly carried through, intensified the effect exponentially. It was like experiencing Augustus’ reign oneself–the emperor’s image everywhere, on everything, instantly recognizable by everyone in every far-flung corner of the empire, benevolent and “august.” It didn’t come across at all like Chairman Mao or “Dear Leader”–not to me, anyway. 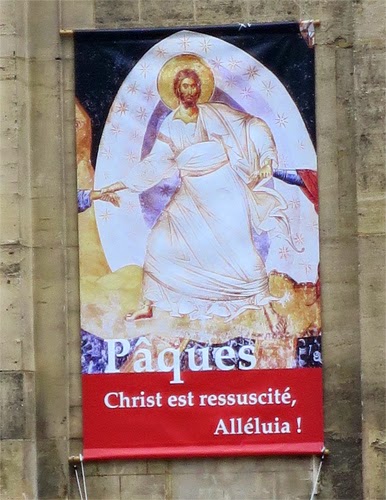 Even granted the idealization, Octavian must have been good-looking, and the way his hair is arranged became a trademark that everyone can recognize even today. His political skills were amazing. The whole project is quite awe-inspiring. I am amused to remember how, when I was a young person studying “c.c.” (classical civilization) in college, and again later when my mother and I spent two weeks in Greece, I snubbed Roman and Hellenistic statuary. Now the Greek statues that I used to adore seem a bit too pretty.

Granting all this, let’s think about what it was like for the earliest Christians. It is somewhat analogous to the situation of the Hebrews when they were in exile in Babylon, but perhaps not so much, because the Pax Romana brought with it certain values that even today seem admirable, and Augustus was at pains to give the impression of beneficence. The point is that the Christian refusal to say Kurios Kaisar  (Caesar is Lord) was truly extraordinary under the circumstances. Augustus was dead at the time of the resurrection of Christ, but he had succeeded in apotheosizing himself and his wife Livia (as the exhibition makes clear) and the far-reaching nature of his accomplishments penetrated every corner of the empire. According to Robert Wilken’s classic, The Christians as the Romans Saw Them, the Christians were thought to be unforgivably irreligious because they were turning away from the traditional pietas that every good Roman accepted, even embraced, as the foundation of public life–so much so that the Christians were sometimes even considered to be atheists! (Julian the Apostate: see Wilken, p. 176, Yale paperback edition)

At the time of the crucifixion, the emperor was Tiberius, and when Christianity became a force to be reckoned with, it was Nero. I found this, by R. C. Sproul, online:

[Rome] tried to enforce a loyalty oath to the emperor cult of religion, in which all people were required to recite the phrase kaisar kurios — “Caesar is lord.” The Christians responded by showing every possible form of civil obedience, by paying their taxes, by honoring the king, by being model citizens; but they could not in good conscience obey the mandate of Caesar to proclaim him lord. Their response to the loyalty oath, kaisar kurios, was as profound in its ramifications as it was simple in its expression, Jesus ho kurios, Jesus is Lord. The lordship of Jesus is not simply a hope of Christians that someday might be realized; it is a truth that has already taken place. It is the task of the church to bear witness to that invisible kingdom, or as Calvin put it, it is the task of the church to make the invisible kingdom of Christ visible. Though invisible, it is nevertheless real.

Therefore, it became clear that Christianity really was a threat to the foundations of the Empire. Is this not still the question for us today? What is the foundation of the Kingdom of God? when does it become impossible to reconcile the rule of Christ with the claims of earthly rule?

At St Thomas Fifth Avenue, it has been the custom for some years to sing the Latin anthem Christus vincit! Christus regnat!, Christus imperat! (loosely translated “Christ has conquered, Christ reigns, Christ [alone] is Emperor”) every year on Easter Sunday. It was smashingly arranged by Gerre Hancock, of St Thomas, from a French tune by Joseph Noyon.  It certainly made an overwhelming impression on me this year. Don’t try it on YouTube! the version that pops up first is by a Presbyterian church in Philadelphia and it’s deplorable–the ushers are taking up the collection while it’s being sung by the choir. I am a crypto-Presbyterian, but musically they can really screw it up…It ought to be an act of worship that lifts the whole congregation to the throne of God. At St Thomas it is sung standing by choir and congregation as a response to the reading of the resurrection message from the Gospel.

As I went from room to room at the Augustus exhibition, the tune with the trumpets and timpani kept ringing through my head. What does it mean to affirm that the true Emperor is Christ?

The Roman Catholic Right in the US is taking off after Pope Francis for being too humble (mock-humble, some say on their blogs). He has been insisting that the gospel must be offered in welcoming and embracing terms. That is true, of course. The Church must never return to the Crusader-Inquisitorial mentality. Given the fact that such a mentality runs deep in human nature, it’s essential to be ever-militant against it (see how easy it is to slip into military imagery?). However, to move away altogether from saying that Jesus is Lord, as some would have us do, is to renounce the title that St Paul uses more than any other for his Savior and ours. More, to reject the title Kurios (Imperator) is to betray the gospel precisely in its geo-political, cosmic significance. During the struggle against apartheid, Desmond Tutu never stopped reminding his people that “I’ve read the end of the book! We win!”

This brings me back to another experience in Paris, at the interdenominational American Church (not to be confused with the lovely Episcopal/Anglican American Cathedral, which is only a few blocks away). Go to Paris to learn about Rome, go to Paris to hear a singing group from Old Saybrook, Connecticut, just up I-95 from us! The group was called Con Brio and it certainly lives up to its name. Among other numbers they did a terrific rendition of “The Great Gettin’ Up Morning”…I’d almost call it apocalyptic.  Just as good, and just as infectious, was the one with the refrain, “Sing to the power of the Lord come down…praise his Name, praise his Holy Name.” What a great motto for preachers that would be! Sing to the power of the Lord come down.

Every day I do my back exercises while listening to “Morning Edition” on NPR. That’s a problem on Sunday, because the only thing available on NPR at that time is “On Being,” the syncretistic talk show hosted by Krista Tippett who seems to have a rule against inviting anyone to talk about Christian theology. The morning after we returned from Paris, she had a guest who kept talking about “the power of possibility.” That’s a perfect description of most of the preaching that I hear as I travel about the church. J. Louis Martyn, one of my most important professors and an acknowledged giant among interpreters of St Paul, taught his students always to substitute the word “power” when we were tempted to talk about “possibility” in connection with the story of God in Jesus Christ.

So…as I prepare to vanish until mid-July when, God willing, I will have finished my project of 18 years’ work, my book about the Crucifixion, I close with these two clarion calls:

Sing to the power of the Lord come down!