An image for Lenten preaching and meditation 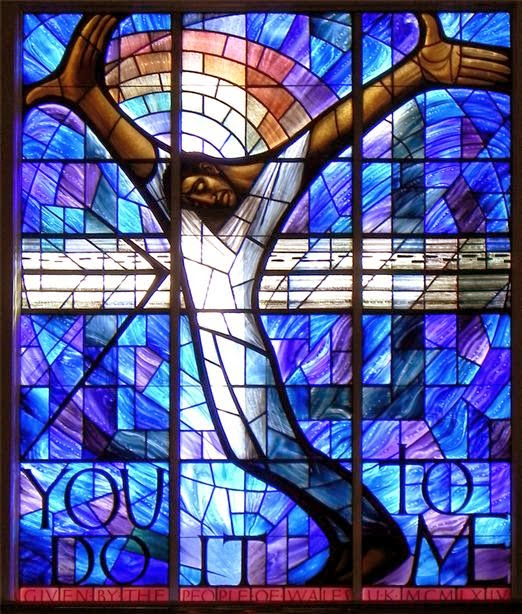 The “Wales Window” at Sixteenth Street Baptist Church in Birmingham, Alabama, should be much better known. I brought home a postcard from my visit there a few years ago, and I am happy that it just turned up as I was cleaning out some of my files. This stained-glass window was given to
the congregation by the people of Wales as a memorial to the four little girls who died in the bombing of the church during the height of the civil rights movement in “Bombingham.”

You can Google “Wales Window Alabama” for various angles on the image, and go also to the Sixteenth Street Baptist Church website and click on History for a five-part capsule. How wonderful it is that the congregation at Ebenezer seems still to be brimming with Christ-centered life.

This image is very unusual and worthy of pondering. It is strangely placed in the church–at the back–and one wonders if the designer might have been disappointed about that, but perhaps it was the only option. At any rate, the window strikes me as a true work of art, and a significant addition to the iconography of the crucifixion. I wish I had included it among the illustrations in my book The Undoing of Death. It depicts Christ with very dark skin and a facial expression of profound sorrow and suffering. Somehow it manages to suggest not only the agony of a victim of torture but also the Messiah’s identification with his suffering people.

Why is he wearing a white suit and heavy shoes instead of the usual loincloth? I am not sure about this. It could suggest anything from a baptismal garment to a prison jumpsuit or chain-gang outfit. Another unusual feature of the design is that Christ is not actually attached to the cross, but seems to be emerging out of it. I am not certain what this was intended to mean, but to me it suggests that even on the cross he is actively engaged with the domain of Death and cannot be fastened down by his executioners. His arms and hands, tortured though they are, appear strong and all-welcoming; the window designer says that one hand repels evil as the other hand embraces. The idea of victory even in the most supreme anguish is also conveyed by the fact that whereas the Lord’s feet and lower legs are blackened as though deep in ashes, his upper body is suffused with light.

One of the most striking aspects of the window is the biblical text “you do it to me,” from the parable of the sheep and the goats in Matthew 25:40. Obviously this allows multiple interpretations — I had the privilege of discussing this with students at the Duke Divinity School last week — all of them legitimate within a biblical range. Surely a most important one is the reminder that our actions toward one another mirror our relationship to the Lord, for good or ill.

This image strikes me as uncommonly powerful in its message. It must be comforting and strengthening to the congregation even now, many years after the terrible event that inspired it.